If you are someone who has a very busy, overthinking mind, you probably care too much about what other people think or say about you. Overthinkers have a loud brain that forces them to over analyze everything around them.

But, these people have usually one more thing that makes it even harder for them to handle life challenges.

And when a loud mind is combined with a soft, vulnerable heart it, well, we all know what happens.

These peculiar, but incredible human beings like to believe that the world is indeed black and white. There’s no gray area for them. They could never endure the pressure of uncertainty, especially when it comes to love. Overthinkers could never ‘hang out’ without giving themselves in entirely.

They never pretend. They cannot hide their emotions and pretend they’re indifferent. They either love or they hate. There are no ‘in-between’ feelings, only profound, genuine emotions.

Overthinkers are people who have a hard time balancing between being on their own and exposing themselves to the world. They tend to struggle to be around people and be generally present in every moment. Because the more people around them, the more chaotic their thoughts become.

Socializing with other human beings can easily overwhelm these sensitive creatures, therefore the only way they can fully function is if they isolate themselves from everything and everyone that is disturbing their peace. 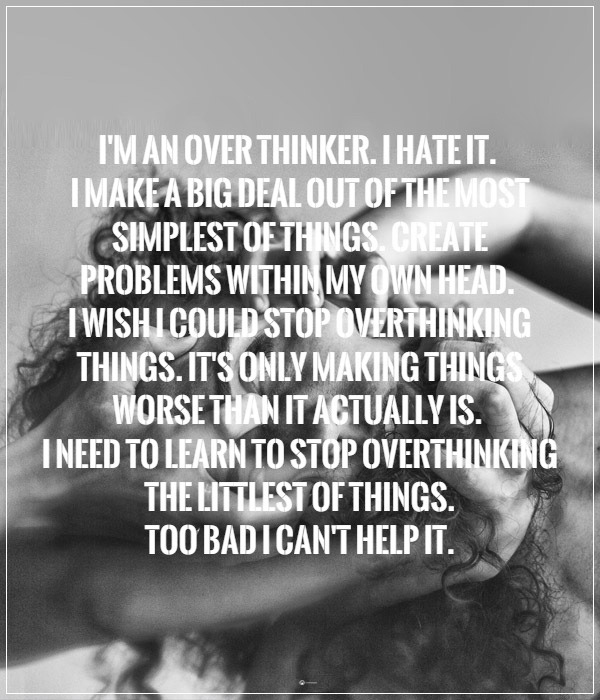 However, the one thing that troubles these people the most is their eternal crave for love. Some of you would probably say, “But how is that a wrong thing?”.

You see, overthinkers have a fragile and sensitive heart. The mere thought of someone destroying their fragile heart into million tiny pieces terrifies them beyond words. So, as a result, most of these creatures condemn themselves to a life without love simply because they are too afraid to put themselves out there and embrace the risk of falling in love.

Overthinkers live to find the true meaning behind everything that surrounds them. The reason for their existence, the reason for their pain, their happiness, the way others treat them. Even if sometimes, some of the questions don’t even deserve an answer.

It is in their blood. It’s just the way they are.

At the end of the day, they might be the most difficult people to love, but the thing that makes them extraordinary and peculiar is their own, unique way of functioning. Their minds are known as busy and chaotic, but it is their differences, their emotional intelligence and pure soul that makes them the most honest and genuine human beings on this planet.