Last summer, when Kristin Naylor was one week out from a scheduled cesarean section to deliver her third child, she went for a routine visit with her obstetrician and was told there was no longer a heartbeat. Hours later, Naylor delivered a stillborn daughter, Abby.

A few months before she was due, Naylor had reached out to Pennsylvania-based documentary photographer Meg Brock, a friend of a friend, to see if she were free to take some family photos after the baby’s birth. Brock tracked Naylor’s pregnancy on Instagram and in late July saw the couple’s wrenching update. Naylor continued to post about her grief and about stillbirth, and eventually Brock reached out to see if she might be interested in doing a photo shoot to commemorate Abby.

In the 10 months since her daughter died, Naylor, 41, has developed a deep passion for ending the stigma and isolation that surround stillbirth, which takes roughly 24,000 babies each year in the United States. So she said yes. Here, in her own words, is a bit of her story.

My husband and I have two boys. They’re 4 and 2 1/2. We weren’t trying for a girl — but when we found out, we were super, super excited. I had a pretty smooth pregnancy, although I am high-risk because I turned 40 while I was pregnant with Abby, and our firstborn was a preemie. He was born at 31 weeks because of preeclampsia. So I was closely monitored, but there was really nothing our health care providers were too concerned about. 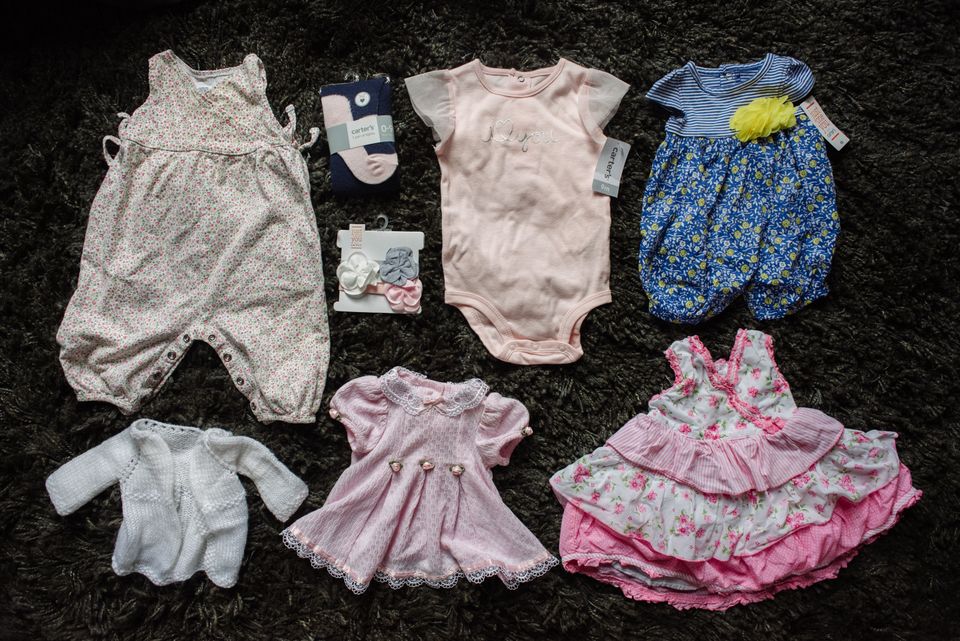 At 38 weeks, I took my blood pressure at home and it was super high. I called my nurse and she told us to come into the hospital. They monitored me and the baby for a few hours, and my blood pressure never spiked. They weren’t concerned, so they gave me a couple of bags of fluid and sent me home.

Now that is one of the things that just kills me about our story. We were there. I was 38 weeks pregnant. I’m 40 years old. I have a history of preeclampsia. But during our NICU experience with our first, they taught us that every day in the womb matters. So at the time, I was glad the hospital’s protocol wasn’t just to deliver the baby. 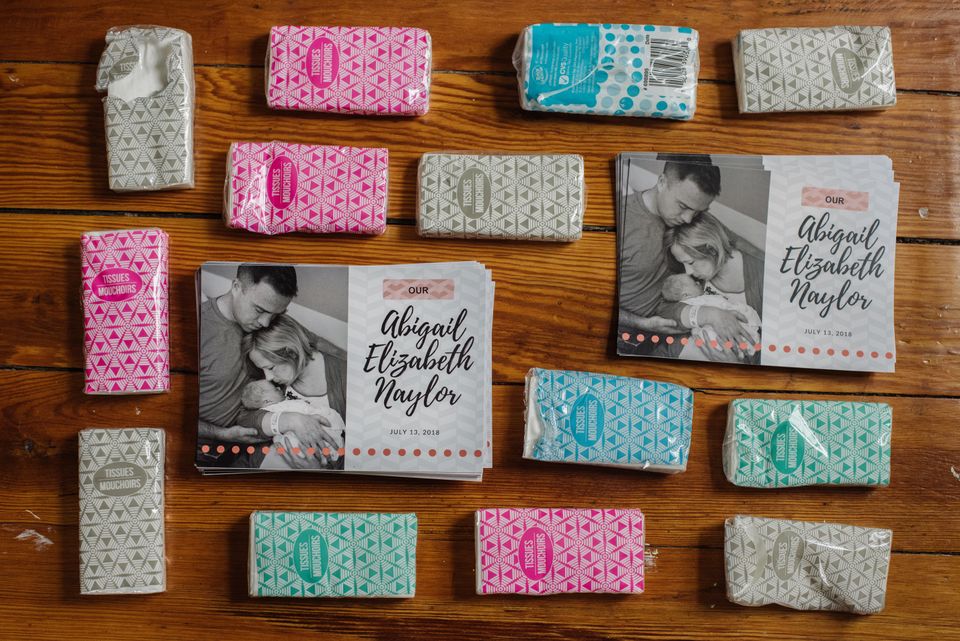 One week later, I went in for what was supposed to be my last OB visit before my planned C-section. It was just supposed to be, like, weight, blood pressure, check the heartbeat, and see you later. I was in with a doctor I hadn’t seen in quite a while, and he had a medical student with him. She came over to find Abby’s heartbeat, but she couldn’t, even though normally they did right away.

In my head, I told myself, “It’s just a medical student.” I tried to stop myself from going down that path. The doctor took over and he was looking, and looking, and looking. He said, “I’m going to stop torturing you. Let’s go around the corner to the ultrasound machine.”

I laid down, and they had to turn the machine on and it just felt like … forever. There were I don’t know how many people standing there above me. I had my hand over my eyes because I didn’t want to see it on their faces.

Eventually, the doctor said, “I’m so sorry. There is no heartbeat.” 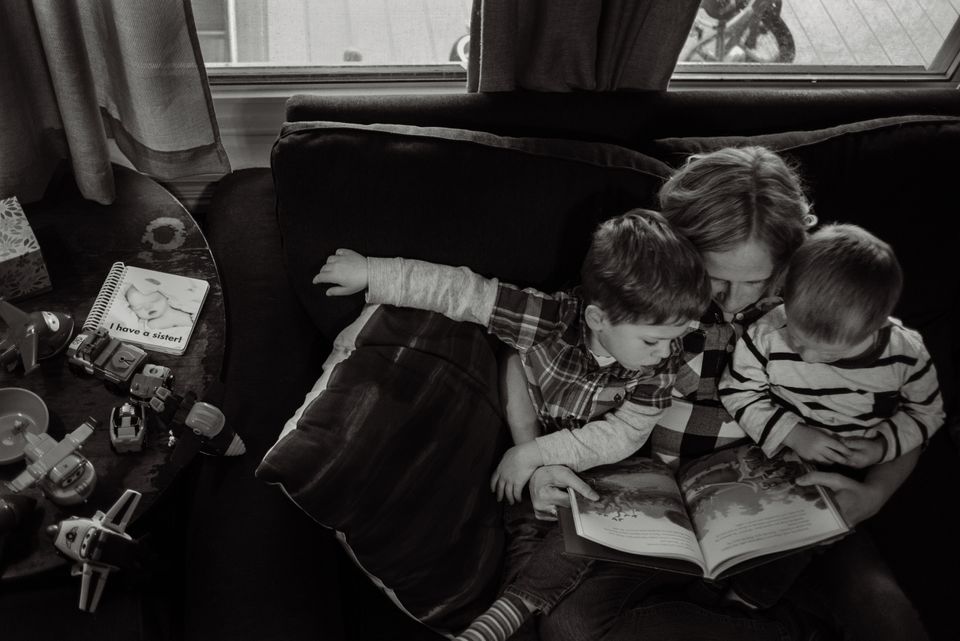 I had to call my husband and tell him. He met me at the hospital — a nurse drove me. And then we had to wait while they got ready to do a C-section, which I didn’t care about because that was my time with her, you know? I wasn’t in a hurry. You’re just in shock. I mean sometimes I still feel like I’m in shock. I feel like I’m telling you somebody else’s story.

I knew that I wanted to see her and I knew that I wanted to hold her and be with her as much as I could, but I still felt nervous. After she was born, my husband and Abby were waiting for me to come around from the OR to the recovery room. I asked him, “What does she look like?” I remember one of the nurses telling me I could ask someone to describe her to me if I felt nervous about seeing her.

And he just said, “She’s beautiful.” 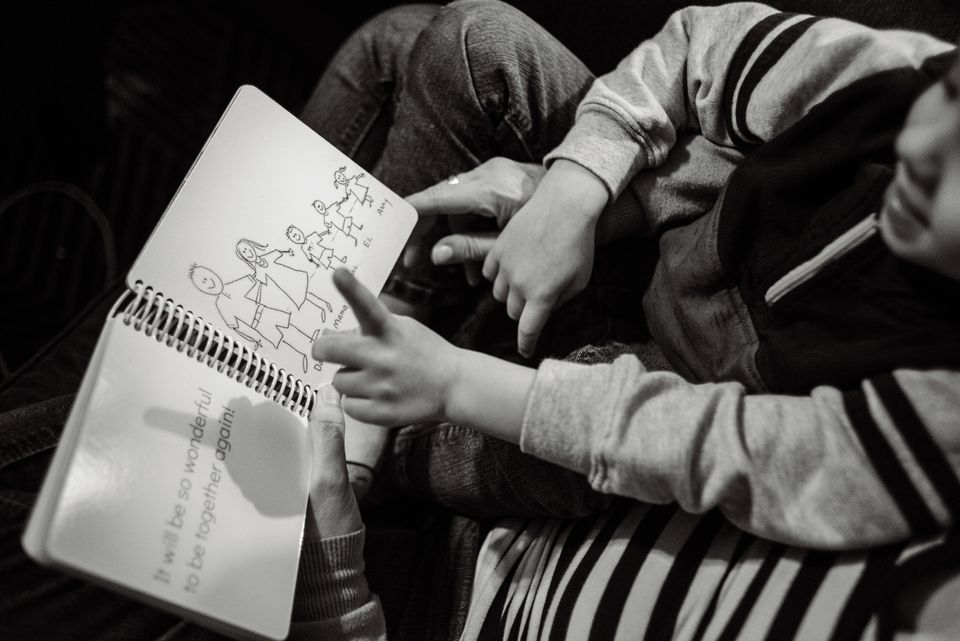 She wasperfect and beautiful. When I saw her, it was almost harder that there was nothing visibly wrong with her.

She died of a hyper-coiled cord — basically, a cord accident. The doctors told us that in 50% of cases, there’s no explanation, and I think we were happy to at least know. But because of how she died, we had no forewarning. We thought we were having a perfectly healthy baby girl in just four days. 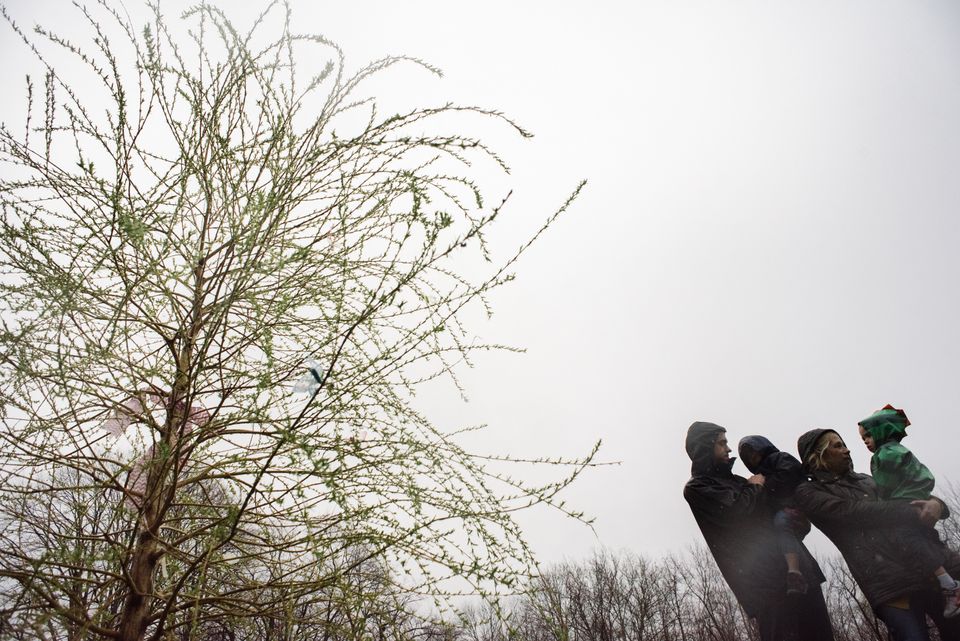 Even early on you start hearing, “Oh, my neighbor lost a baby at eight months” and “My aunt lost a baby at nine months.” It was like, whoa. This is so much more common than anyone realizes.

When Meg reached out with the idea of doing some photos, I said yes because I want to try and break the stigma of being a stillbirth parent. I wanted to show that this is what it is like to be in grief when your child dies. I wasn’t interested in flaunting my story or making it appear that I was asking for pity, or whatever.

I love these photos. Our boys are so young, and it’s that time of life where they change so quickly, so I’ve tried maybe two times a year to get family photos done. And we hadn’t done them since we lost Abby, because I was like, I’m so stuck. How do we do photos of our family when part of our family is missing? I look at what Meg did, and it is like she is there. With the tree we planted for her. And her room. And the book I made the boys — all those things. It’s such a gift to us. It’s like OK, she’s not here in our arms, but I want our family to feel like she’s still here in some ways. 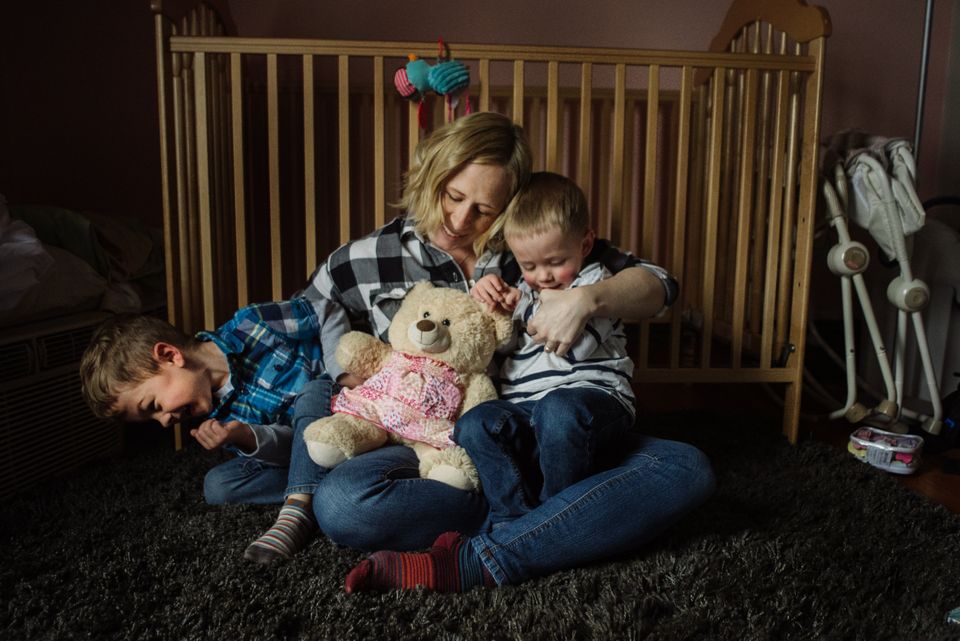 I’ve never had an intimate experience with grief like this. I lost my grandma when I was 16, but that’s the natural order, it’s not this complex, complicated experience. Even from the very beginning — from very well-intentioned people and the empathy cards you get — there are all these messages of “Stay strong,” “Be brave,” “God needed an angel.” When somebody tells me to be strong I just think … what? You want me to show you that here I am being strong, not showing you my tears, not showing you that my whole world is smashed to pieces? 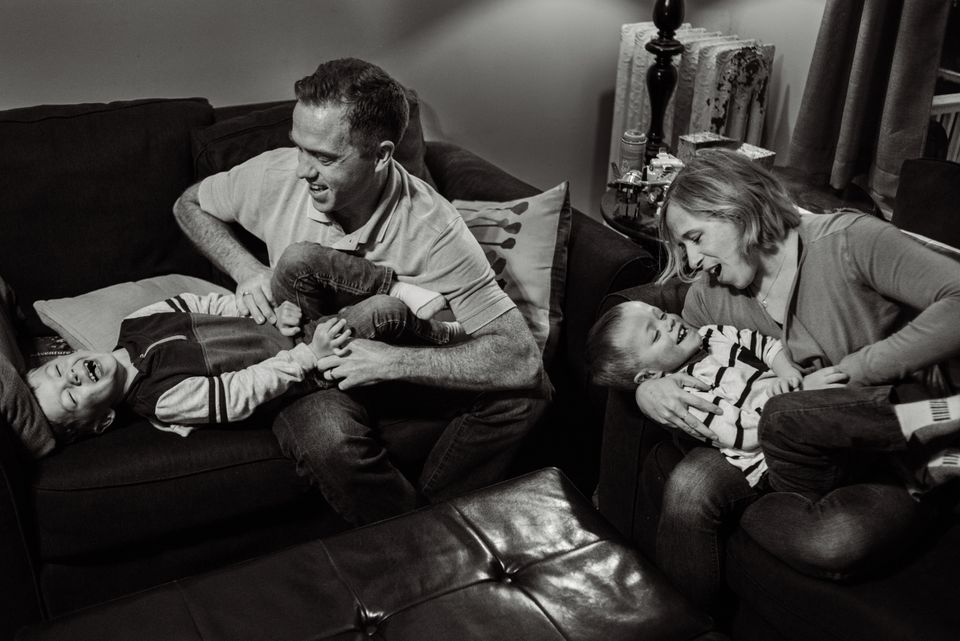 Another one that is so hard for me is when people tell me, “At least you have your boys.” Of course, I am grateful for my boys. But I am also devastated that my daughter is not here. And I do not have to choose between those two things. 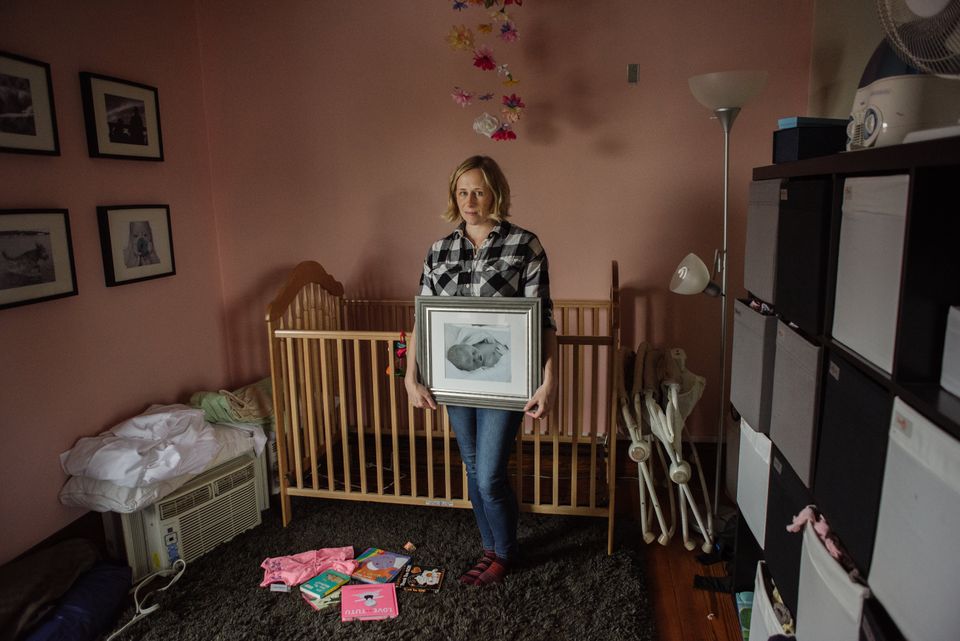 One of the things I think about a lot now is that stillbirth is 10 times more common than sudden infant death syndrome, but I don’t think anybody really knows that. There are so many holes in the system. We need more funding, more research. I think there is this sense that when stillbirth happens, it’s kind of inevitable — and that is just not the case.

I also think our culture has this idea that the death isn’t so devastating because the baby wasn’t born yet. I’d argue the exact opposite. We were almost there. I was going to bring my daughter home in four days.

Captions have been edited and condensed.