Badass women are fierce, resilient, and independent. They’re able to take care of themselves because they know they deserve the best. These women don’t depend on others for their happiness because they’re already happy and fulfilled and they’re aware of their worth.

And you might think that a woman who is courageous, powerful, and beautiful was born this way, but no. Hell, NO! The woman of this kind wasn’t born under a lucky star.  Life hasn’t always been like this to her. Instead, it’s been hard.

Yet, she always managed to get up. Every time she fell, she managed to rise up and shake off her pain, and every time she rose up stronger. Because she was never a victim, nor will she ever allow herself to be one.

So, if you’ve been lucky enough to love and be loved by such woman, make sure you always bear the following things in mind so that you know what to expect in your relationship with her.

1. They aren’t looking for a relationship to be “saved.”

No. They learned at a young age that the only person who could save them was the person staring back at them in the mirror. They never relied on anyone for their help and support, so why start now?

In her relationships, an alpha woman doesn’t look for a hero who will save her. The reason why she’s is with you is not that she’s afraid of being lonely or that she wants to feel happy, loved, emotionally fulfilled, and worthy. She already feels that way.

She doesn’t need you to buy her expensive gifts and take her to fancy places. She can afford all that on her own. This woman is with you because she truly loves you and finds you special too.

2. They know what kind of man they want to be with.

They’ve been in a couple of crappy relationships with guys who didn’t know how to treat them right and appreciate them. Guys who took them for granted and broke their hearts. And this has been nothing else but a valuable experience that has taught them a lesson.

These sh*tty relationships have taught them what types of men don’t deserve to be a part of their life. Fickle, shallow, manipulative, unfaithful men and one-sided relationships are not for these women. They simply weren’t made to deal with that kind of bullsh*t. 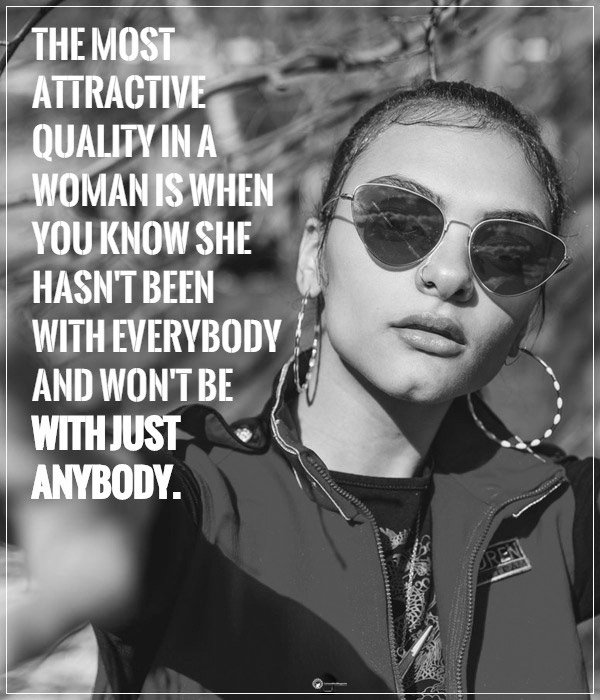 3. They know how to manage their emotions.

Strong women are emotionally mature. They can recognize and control their own emotions – they don’t need anyone to do that for them. Due to this quality, they’re easy to talk to during arguments.

They don’t yell and shout at you or insult you. They’d never allow themselves to lose their temper and let their strong emotions gain control over their actions and decisions.

And this is exactly how this woman expects you to treat her during arguments. She expects you to be able and willing to talk things out and solve any disagreement in a mature, adult, civilized kind of manner.

4. They’re not afraid of conflict.

Strong women never sweep problems under the carpet. They never let any hurtful word or action remain unattended and fester. Instead, they openly and directly address their problems, be that small or big.

So, if she finds some sort of misunderstanding between you or feels something is not right in the relationship, know that she won’t hesitate to talk about it with you and try her best to reach a solution that will be the best for both of you.

You should also know that she’ll always be patient and willing to listen to your point of view without judging and criticizing you or making you feel unimportant.

5. They see a relationship as a team.

They’d never be with someone who would slow them down in life. Someone who would stand in the way to their happiness and success. They choose men who they believe are capable of keeping up with them in every aspect of life. Men who are strong, resilient, resourceful, and committed like they are.

So, if you’ve been lucky to call this kind of woman yours, know that she’s with you because she knows you’ll always have her back. You’ll always be there to encourage her through her losses or when she makes a mistake.

6. They don’t get jealous easily.

It’ll take you a while to gain the trust of this kind of woman. You’ll have to try hard to earn it and prove that you deserve it. Yet, you should also keep in mind that once you win her trust, it doesn’t mean you can do whatever you want.

If this woman trusts you, then she has no worries about who you hang out with or why you sometimes come home late from work. And she certainly doesn’t get jealous when you post selfies of you and your female colleagues on Instagram. Hell, no. This lady is perfectly well aware of her worth and she’s not falling for those tricks.

Yet, please, remember not to take her trust for granted because if you betray it, you’ll never win it back again. 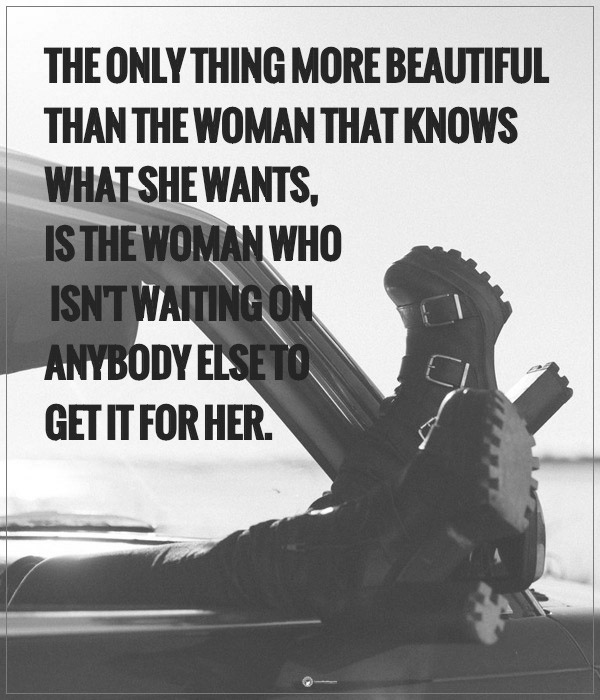 Badass women don’t want to be with someone who will make them feel warm and comfortable in winter. They want their man to be there through every season and to always be willing to weather all the storms together with them.

This kind of woman looks for someone with whom they’ll be able to connect on a deep emotional, mental, and spiritual level. They look for serious, meaningful, soulmate kind of relationship, and they’d never settle for anything less than that.

8. They have clear goals and dreams.

A fierce, independent woman doesn’t need a man to guide her through life. She knows exactly where she’s headed and how to get there.

Just because she is with you, it doesn’t mean she’ll give up on her goals and passions. That’s out of the question. And don’t think that she’s self-centered or selfish because of this. She just knows her priorities.

She wants you to have your own goals, dreams, and desires so that you both have something to work towards while supporting and inspiring each other along the way.